Copyright: © 2018 Fleming RM, et al. This is an open-access article distributed under the terms of the Creative Commons Attribution License, which permits unrestricted use, distribution, and reproduction in any medium, provided the original author and source are credited.

Everyone is beginning to understand the Importance of Quantification for use in Medicine, particularly Nuclear Medicine. With the recent introduction of mandates by CMS, ASNC and the SNMMI for Quantification, it is not surprising that papers are beginning to be published on the topic. One recent publication by Zhao et al. demonstrates the misunderstanding that is plaguing the field of Modern Nuclear Medicine [1].

Quantification is not asking whether a tool can count, but rather whether the tool can count accurately. In the Zhao paper, the authors present several methods using phantoms and display “counts” of isotope scintillation activity and reported on the ability of the cameras being used to count. Concluding that there is a camera calibration factor, which must be applied with one such example in the paper being the counts obtained using a point source with a SPECT camera using a 128 × 128 matrix. The remainder of this LTE is applicable to all of the discussion in that paper.

Herein lies a fundamental problem with communication and definitions being used, which needs to be corrected now before these errors persist. Quantification determination is not merely a matter of asking whether the camera (our scintillation measuring tool) can count. This is like asking a child can you count and the child nods their head and then says 1, 2, 3, 6, 9, 5, 14, etc. Yes, the child can count; but not accurately.

Qualitative imaging produces a yes or no phenomenon. Yes the interpretation is that there is disease or No, the interpretation is that there isn’t disease. The consequence of this approach results in sensitivity and specificity issues. Standardization and Quantitative methods for scintillation tools, which we established first with The Fleming Method (TFM©℗), which is the first component of the Utility Patent (FMTVDM-#9566037), are related to accuracy and they do not have mathematical models to manipulate and massage the data [2,3]. Rather, the tool is calibrated as all other forms of measure are calibrated; viz. the tool is calibrated to a known unchanging standard.

As recently presented [4] and as published [5-9], for our scintillation tools to be accurate, consistent and reproducible around the world, you must calibrate these tools to a known standard.

Standards are known and unchanging! It doesn’t matter whether we are talking about a length, weight, unit of time or scintillation; the standard must be unchanging and known for the resulting quantification measurement to be considered accurate, consistent and reproducible, allowing those using the tool anywhere in the world at any time with any tool, which has been standardized using this “known” to yield the same measurement without variance. The standardization is dependent upon the tool and the known standard (FMTVDM©℗). Anything less is the child counting.

The patent (FMTVDM©℗) provides the first and only method detailing how this standardization process must be done. Using TFM©℗, the tool, in this instance a nuclear camera, is calibrated to “changes” in Isotope (the known standard) over time, which demonstrates that the tool can not only accurately measure the scintillation emission but that it can accurately measure the change in the scintillation emissions that will occur over time due to the physical constant of the Isotope decay and resulting known change in scintillation (Figure 1). 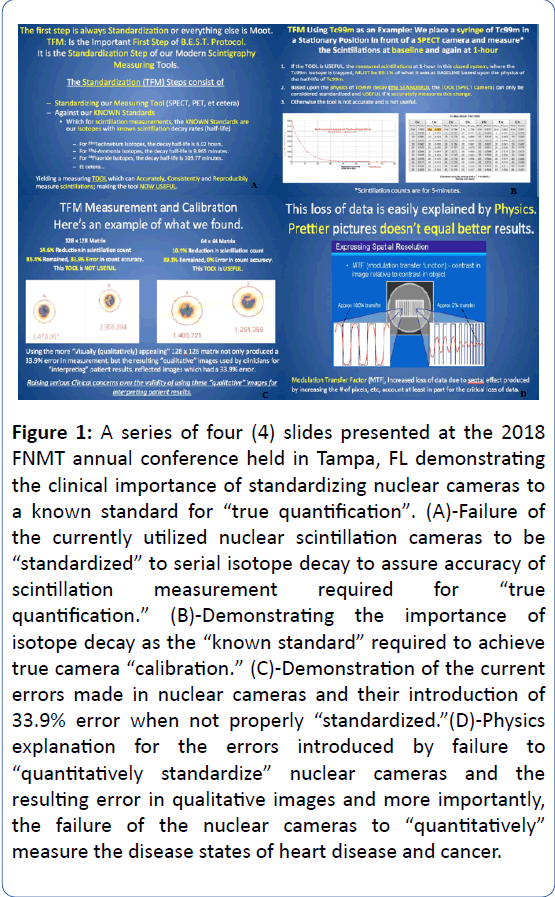 Figure 1: A series of four (4) slides presented at the 2018 FNMT annual conference held in Tampa, FL demonstrating the clinical importance of standardizing nuclear cameras to a known standard for “true quantification”. (A)-Failure of the currently utilized nuclear scintillation cameras to be “standardized” to serial isotope decay to assure accuracy of scintillation measurement required for “true quantification.” (B)-Demonstrating the importance of isotope decay as the “known standard” required to achieve true camera “calibration.” (C)-Demonstration of the current errors made in nuclear cameras and their introduction of 33.9% error when not properly “standardized.”(D)-Physics explanation for the errors introduced by failure to “quantitatively standardize” nuclear cameras and the resulting error in qualitative images and more importantly, the failure of the nuclear cameras to “quantitatively” measure the disease states of heart disease and cancer.

An example of such a measurement is particularly germane to the Zhao paper. Zhao reported on a point source for the SPECT camera using a 128 × 128 matrix. Figure 1 slides were presented at the 2018 Florida Society of Nuclear Medicine Technology meeting on 6 May 2018 [4].

Figure 1 shows the problem associated with simply asking if the camera can count/measure scintillations. Like the child attempting to count, the 128 × 128 matrix can attempt to count but the presumption that it must be counting accurately is based upon a flawed perception and misunderstanding the definition of quantification which is permeating and contaminating the medical literature.

As shown in Figure 1, when the SPECT camera was asked to count over time using the 128 × 128 matrix setting for this particular camera, there was a 14.6% reduction in scintillation quantification over an hour, which based upon the known standard of the decay of Tc99m, represented an error of 33.9% as the actual difference in scintillation activity was 10.9% reduction. Based upon the physical decay curves of Tc99m, the change in counts could only actually be 10.9%. The physics of isotope decay do not change. Hence, while the setting of 128 × 128 matrix counted and may have appeared more visually appealing than the 64 × 64 matrix, when the camera was set to 128 × 128 matrix, it did not count accurately, making it a useless tool as its “quantification” was inaccurate.

When the same camera (Figure 1) was set to a 64 × 64 matrix, the scintillation count difference over 60 minutes showed the expected scintillation reduction of 10.9% demonstrating that the scintillation tool for measuring/ quantification was in fact appropriately calibrated to the known standard, making the tool accurate, consistent and reproducible.

This difference between the 128 × 128 and the 64 × 64 matrix settings is due to septal limitations, Fourier Transform and modulation transfer function (MTF). To presume that a scintillation camera (tool) is providing accurate results which can be reported or used clinically without this calibration (TFM©℗) method is to presume that our tools do not need to be calibrated to perform research or clinical studies. The error of this approach is folly.

Quantification cannot be determined merely by placing an Isotope in front of a tool, even if it is a tool, which can detect scintillations. Detection is not measurement. The tool, like all tools must be calibrated against a known standard for it to be accurate, consistent and reproducible. Anything less produces a tool, which is useless. FMTVDM©℗ provides TFM©℗ for scintillation tools (planar, SPECT, PET, hand held probes, etc.) standardization required for final quantification of nuclear imaging.

FMTVDM-TFM©℗ is the first and only method, which can accurately standardize the tools we are using in nuclear medicine and physics. Without performing this calibration step, our tools are nothing more than children counting. FMTVDM©℗ and its standardization step, TFM©℗, is applicable to any tool, using any isotope, including inter alia PET, SPECT, hand held probes. It is not limited to SPECT cameras or Tc99m isotopes.

FMTVDM©℗ was issued to the primary author by the USPTO.

No human subjects were required for the material contained within this manuscript.

Data for this material is included with the USPTO.

Funding was through the Camelot Foundation 501(c) (3).

All authors have participated in the preparation of this letter.