Congenital cystic adenomatoid malformation (CCAM) is a rare disorder with incidence of 1:11,000 t0 1:35,000 [1,2]. The reported mortality rate of prenatally diagnosed CCAMs ranges from 9-49% [3]. It was first described by Ch’in and Tang in 1949 [4]. It represents 25% of all congenital lung abnormalities and is characterized by a multicystic mass of pulmonary tissue with an abnormal proliferation of the bronchial structure [5]. Patients usually present in the neonatal period or early childhood with respiratory distress, recurrent chest infection, haemoptysis or failure to thrive [6,7]. 90% patients are diagnosed within first two years of life [8]. The authors present a case of a 2 month old baby diagnosed as CCAM after complication aroused during chest tube insertion and later successfully treated by surgery.

A 2 month old female baby was referred to this institute with 6 days fever and 2 days history of fever and 2 days history of respiratory distress. Preadmission chest skiagram revealed left sided massive pneumothorax with mediastinal shift. The patient was shifted to paediatric intensive care unit. An appropriate size intercostals tube was inserted in left fifth intercostals space. Immediately after chest tube insertion a gush of air came out and the baby developed bradycardia with heart rate of 30-40 beats/ minute and oxygen saturation of 60% with 3litre/minute moist O2 via nasal prongs. The patient was resuscitated according to paediatric BLS and ACLS protocol with chest compression, bag and mask ventilation and intravenous injection of adrenaline and atropine. Patient was intubated thereafter to maintain adequate oxygenation and airway control. Volume restoration was done with normal saline and a dopamine drip was started to maintain stable hemodynamics. The next day, the patient condition improved significantly and the patient was sent for a CT scan. CT scan reports revealed multiple cystic lesions of different sizes having thin and thick wall with compression collapse of rest of the lung. Trachea and major bronchi were normal. Surgical exploration with removal of the affected lobe was planned. Following left posterolateral thoracotomy, the affected segments were found localised in lower lobe and expanded cysts has caused compression collapse of rest of the lung. Lower lobe lobectomy of the left lung was done. The upper and middle lobe expanded well with recruitment manoeuvres. Postoperatively patient was kept in elective ventilation for one day. Postoperative advice included respiratory physiotherapy, antibiotics, analgesics and nebulised bronchodilators as required. Chest tube was removed after 3 days. The patient was discharged home after 6 days (Figures 1-3). 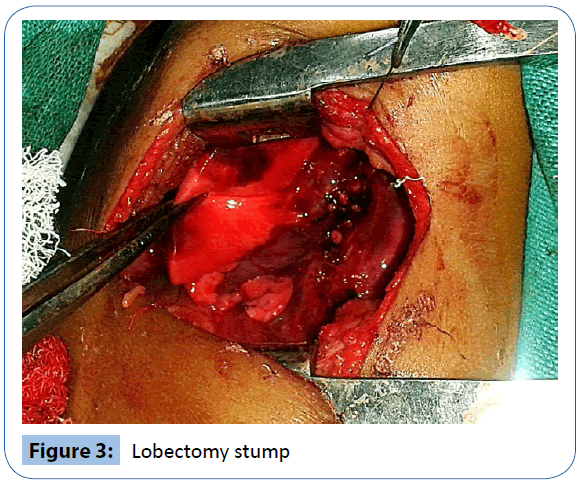 Congenital cystic adenomatoid malformation is an uncommon congenital malformation of the lung which presents usually in early childhood. With advances in ultrasonography, this abnormality may be diagnosed in fetal life. A common association is presence of polyhydramnios in mother within 23rd week of gestation. Upto one third of antenatally diagnosed cystic lesion resolve before birth [9-12]. Davenport et al. [9] published a case series on antenatally diagnosed cystic lung lesions between 1995 - 2001 and found excellent prognosis in the absence of signs of severe foetal distress. They recommended that decision of surgery should be based on appropriate postnatal investigations (eg, CT scans), rather than on antenatal behaviour. In developing countries where antenatal check up with ultrasound is an issue, clinicians mostly depend on postnatal presentation. The patient in this report neither underwent any ultrasound in intrauterine period, nor the mother complained about any symptom of polyhydramnios.

Prognosis of CCAM depends on type of CCAM, extent of involvement, age at diagnosis and associated complications. Adzick et al. [3,13], have classified CCAM into two types: microcystic lesions- <5 mm, associated with fetal hydrops and poor outcome, and macrocystic lesions >5 mm, associated with good prognosis. Stocker JT et al. [5] published a classification of CCAM which later revised by Stocker in [14] 2002 and this is currently the most acceptable classification used for diagnosis and treatment planning (Table 1).

Diagnosis of CCAM is accomplished by imaging studies but only histopathology is confirmatory. Chest x-ray may show a mass containing air filled cysts [15]. Sometimes a large cyst in a small baby may be misdiagnosed pneumothorax. CT scan provides a more detailed anatomy. The typical appearance is of multilocular cystic lesions with thin walls surrounded by normal lung parenchyma. The presence of superimposed infection with the lesion may complicate the appearance [3]. Chest radiographs can suggest a localized patchy density, namely a cystic mass; but MDCT best demonstrates the cystic and solid components while ruling out bronchiectasis or a major bronchial obstruction [16]. In authors’ study CT scan successfully identified the nature of the lesion but failed to indicate accurate lobar involvement due to compression collapse of the unaffected lung. Ultrasound or MRI also may be a powerful tool in diagnosis of CCAM.

Congenital diaphragmatic hernia sometimes may be mistakenly diagnosed as CCAM. Both have air fluid level in the lung as well as collapse of the contralateral lung. Congenital pneumonia and pneumatocoele may also present with similar symptoms and sign. Very commonly patient is diagnosed as pneumothorax from clinical findings and X-rays and a chest tube is inserted, as in this case. In presence of large cavity and mediastinal shift pleura should be decompressed slowly, otherwise there may be rapid hemodynamic deterioration as in our case. In such cases, the authors suggest needle thoracostomy as a mean to controlled decompression.

Complication of untreated CCAM include recurrent respiratory tract infection, pneumonia, pneumothorax, pleural effusion, pneumatocoele [17] etc. If untreated, malignancy may develop in CCAM [18-21]. For symptomatic cases indication of surgery is unarguable, but in asymptomatic cases operative management is controversial. Though some clinicians are in favour of observation and follow up, most of the clinicians prefer operative management for the risk of development of carcinoma [22-25]. Timing of surgery is important. Early surgery may be associated with adequate growth and expansion of the remaining lung to restore the total lung volume and satisfactory pulmonary function test. Most of the studies opined in favour of surgery in between 6 to 12 months of age [22]. Calvert and Lakhoo [26] suggested resection between 3 and 6 months of age of all CCAMs diagnosed prenatally to avoid infection risk which is much more common if resected after 6 months.

Patient with CCAM may present with clinical features of massive pneumothorax in early neonatal period. Slow decompression of pleural cavity is mandatory to prevent catastrophe. Early diagnosis with proper imaging is essential for diagnosis. Surgery is the only definitive diagnosis and treatment and should be undertaken as early as possible to prevent infection and malignancy.