The search of biological markers for the early and accurate identification of the diseases leading to dementia is becoming a high priority. Neurosin have been pointed as a promising biomarker for AD since previous studies found its levels in brain tissue, cerebrospinal fluid and blood to be abnormal in AD. We studied the usefulness of measuring plasmatic neurosin in the differential diagnosis of dementia and summarize here our findings.

Measuring plasmatic level of neurosin seems to be useful to assist in distinguishing Alzheimer’s disease (AD) from Vascular Dementia (VD). Additionally finding a high level of neurosin in patients diagnosed with mild cognitive impairment (MCI), or increases in relation to a previous measurement, might predict conversion from MCI to VD, while decreases might predict conversion to AD.

Measuring plasmatic neurosin and other biomarkers early in the course of cognitive impairment could open the door to more-effective interventions. Further tests are needed before this approach can be used in clinical practice.

The threat of a looming pandemic of dementia in elderly people highlights the compelling need for the development and validation of biomarkers that can be used to identify pre-clinical and prodromal stages of disease in addition to fully symptomatic dementia. Patients with mild cognitive impairment (MCI), a condition considered a transitional stage from health to dementia, have increased risk of developing Alzheimer’s disease (AD) [1] although they may, in fact, develop any form of dementia or stay without further deterioration for years. Several treatments have proved to be especially effective when used at early stages of AD. Predicting the evolution early in the course of cognitive impairment would open the door to more-effective interventions.

Nowadays the diagnosis of the different types of dementia is largely based on clinical and neuropsychological assessment. Diagnostic criteria for different dementias are mainly applicable when the disease is clinically patent and the neuropathological changes have been developing for years. The NINCDSADRDA and the DSM-IV-TR criteria for Alzheimer’s disease (AD) are the prevailing diagnostic standards in clinical practice and research. In 2007 a new diagnostic criteria were proposed for research on AD. These new criteria were developed to capture both the earliest stages, before full-blown dementia, as well as the full spectrum of the illness. and are centred on a clinical core of early and significant episodic memory impairment. They stipulate that there must also be at least one or more abnormal biomarkers among structural neuroimaging with MRI, molecular neuroimaging with PET, and cerebrospinal fluid analysis of amyloid beta or tau proteins [2]. However the proposed new criteria for AD were demonstrated to be valid only in about 50% of patients clinically diagnosed as having full-blown AD [3]. Therefore, there is a need to further validate the currently existing biomarkers in large unselected samples and avoid the pitfall of workup bias and circular diagnostic processes. Additionally, valid age-specific cut-off values for the diagnostic markers in question have to be defined.

Since CSF analysis via lumbar puncture is regarded by some as a ‘moderately invasive’ investigative approach, requiring clinical expertise and taking significant clinician and nursing time, peripheral markers may be of great interest because of their easy accessibility. Approaches combining panels of existing biomarkers or surveying the range of proteins in plasma (proteomics) show promise for discovering biomarker profiles that are characteristic of AD, yet distinct from nondemented patients or patients with other forms of dementia.

We studied the usefulness of plasmatic neurosin in the differential diagnosis of dementia. Neurosin (human kallikrein-related peptidase 6, KLK6) is highly expressed in the central nervous system. Although the physiological roles of this serine protease are unknown, in vitro substrates include amyloid precursor protein and components of the extracellular matrix, which are altered in neurological disease, particularly AD). Recent findings suggest that an altered KLK6 expression may contribute to vascular abnormalities in AD and Vascular Dementia (VD) [4]. Neurosin have been pointed as a promising biomarker for AD since previous studies found its levels in brain tissue, cerebrospinal fluid and blood to be abnormal in AD [5-8].

Plasmatic neurosin in patients with MCI

We also measured plasmatic neurosin levels in MCI patients who were observed for 18 months [10]. In a number of patients a second blood sample was obtained at the endpoint. The mean value of plasmatic neurosin concentration differed significantly between MCI patients who converted to VD and those who converted to AD or those who remained at MCI stage. The relative risk of developing VD when neurosin levels are higher than 5.25 ng/ml was high. In those in who a second measurement was done at the end of the study we found that increases in the levels of neurosin correlated with progression to VD while decreases pointed to progression to AD. We concluded that a high level of neurosin in patients diagnosed with MCI, or increases in relation to a previous measurement, might predict conversion from MCI to VD, while decreases might predict conversion to AD.

The ability of predicting the risk of conversion to dementia in patients with MCI brings deep implications in the management of these patients. We are aware it poses ethical concerns but also opens an opportunity to prevent manifest dementia. Through biomarkers, such as neurosin and others, we can now estimate the risk a single patient has to progress to the different types of dementia, and this way we can make an effort to prevent that type of pathology.

For instance, we propose next algorithm for the application of plasmatic neurosin in the management of MCI (Figure 1). Whenever we detect plasmatic neurosin levels higher than 5.25 or an increase in relation to a previous level we can anticipate that a conversion to VD is likely and we could undertake vigorous strategies to hold up the progress of vascular damage, such as optimize the control of cardiovascular risk factors or even start “primary” prophylaxis with drugs. The same way, when we detect high risk of conversion to neurodegenerative disorders we can put patients on specific treatments or preventive strategies. 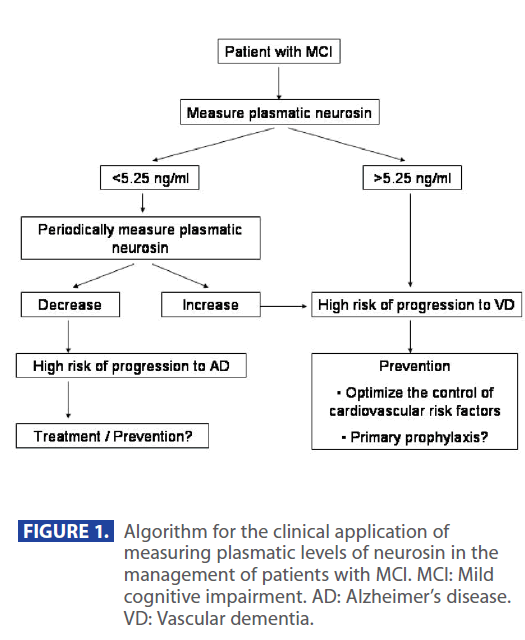 Measuring plasmatic neurosin and other biomarkers early in the course of cognitive impairment could open the door to more-effective interventions. Further tests are needed before this approach can be used in clinical practice.