Copyright: © 2018 Welch JL, et al. This is an open-access article distributed under the terms of the Creative Commons Attribution License, which permits unrestricted use, distribution, and reproduction in any medium, provided the original author and source are credited.

For physicians, diagnosing hematologic malignancies in children can often be challenging. The clinical signs and symptoms can often be non-specific or mimic other disease processes. We present the case of a previously healthy pediatric patient with persistent back and abdominal pain whose ultimate diagnosis of Hodgkin Lymphoma mimicked the osteomyelitis. As this case illustrates, it is imperative to be persistent and maintain a broad differential diagnosis in children during their evaluation and treatment stages in order to make the correct diagnosis.

A previously healthy 12-year-old male presented to the emergency department where he was evaluated for 6-7 weeks of low back pain and one week of diffuse, cramping right lower quadrant abdominal pain. The patient was an active 7th grader who played tennis and basketball and thus thought that his back pain may be musculoskeletal in nature. He had noticed slight improvement of his back pain with Advil; however, his abdominal pain had been worsening over the past week. His parents reported that he “hadn’t looked right” for a few weeks. His review of systems was negative for fever, urologic complaints, cough, shortness of breath, chest pain, testicular pain, trauma, recent travel or exposure to homeless or prison populations. The patient has no significant past medical or surgical history, medications, or allergies. He was not sexually active and denied the use of drugs or alcohol. He lived with his mom, dad, and sister. Family history revealed MRSA skin infections in sister associated with school sports.

Physical examination revealed stable vital signs without fever, and was significant for a diffusely tender abdomen with increased tenderness in the right and left upper quadrants. There was no rebound, guarding, masses, or organomegaly. The patient also had mild tenderness to palpation over the right lumbar paraspinal muscles but no midline tenderness to palpation. There was no notable lymphadenopathy. Overall he appeared to be a healthy pre-teen in no acute distress.

Emergency department evaluation included the following tests. A complete blood count (CBC) revealed a WBC of 11.1 k/ cumm with a normal differential; hemoglobin of 11.2 gm/dL; hematocrit of 34.3%; and platelets of 350 k/cumm. A basic metabolic panel (BMP) and liver function tests were normal. An erythrocyte sedimentation rate (ESR) and C-reactive protein (CRP) were elevated at 76 mm/hr and 3.4 mg/dL, respectively.

A Chest X-ray revealed bilateral hilar lymphadenopathy (Figure 1) with no parenchymal lesions. An abdomen/pelvis with IV contrast showed no signs of acute appendicitis but revealed a destructive lesion of the first lumbar vertebral body (L1) with paraspinal swelling of the adjacent right psoas muscle in addition to multiple microabscesses in the spleen with likely lymphadenopathy near the portal hepatitis. 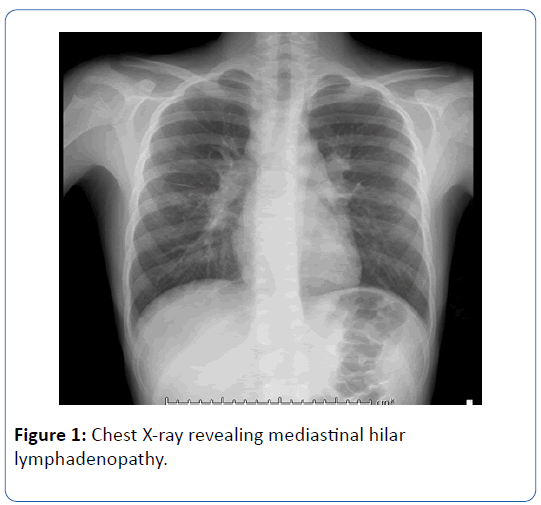 To evaluate this further, an MRI of his lumbar and thoracic spine without contrast was obtained, which revealed a 2 × 1.6 cm destructive lesion in the L1 vertebral body (Figure 2) with associated bone marrow edema and overlying prevertebral soft tissue thickening suspicious for infection vs. malignancy. There was also an enlarged right prevertebral lymph node vs. mass noted at the level of the twelfth thoracic vertebral body (T12) (Figure 3). Of note, the MRI was initially ordered with gadolinium intravenous contrast and the patient suffered an allergic reaction to the contrast, which was treated; therefore the MRI was done without contrast. 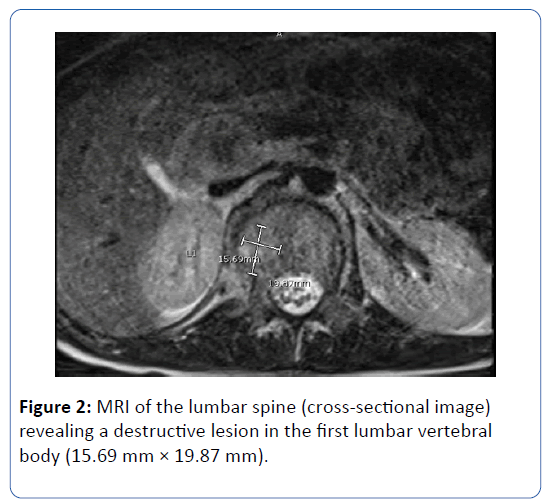 The patient was admitted to the hospital with Neurosurgery and Infectious Disease consults with the working diagnosis of osteomyelitis versus malignancy of the first lumbar vertebral body. He underwent a CT guided biopsy for further confirmation. Biopsy results revealed devitalized soft tissue and bony debris compatible with osteomyelitis. He was started on intravenous antibiotics (vancomycin and piperacillin/ tazobactam) for 24 hours and was discharged in stable condition to home on six weeks of oral trimethoprim/sulfamethoxazole and intravenous ceftriaxone. Biopsy cultures upon discharge from the hospital showed no growth.

Three weeks after his initial presentation to the emergency department, the patient was not improving on antibiotics and suspicion for malignancy was increased, therefore he was referred to Oncology for further evaluation. CT imaging of his neck, chest, abdomen, and pelvis with IV contrast revealed cervical, hilar, and abdominal lymphadenopathy with an L1 vertebral mass and splenic lesions. A cervical lymph node biopsy was performed, which revealed the diagnosis of Stage IIIB Nodular Sclerosing Classical Hodgkin Lymphoma with negative bone marrow biopsy. Given this diagnosis, the patient was admitted to the Oncology service for treatment. He underwent four cycles of chemotherapy with good response as evidenced by follow-up PET/CT scans. One month after completing his chemotherapy, he was doing well and scheduled to begin radiation therapy.

Hodgkin lymphoma arises from germinal center or postgerminal center B cells. Pathologically it consists of neoplastic cells known as Reed-Sternberg cells in an inflammatory background. Hodgkin lymphoma accounts for approximately 0.6% of all cancers diagnosed in the world annually and follows a bimodal age distribution showing a slight male predominance [1]. There are four histologic subtypes, of which Nodular Sclerosing Classical Hodgkin Lymphoma (NSCHL) is the most predominant in developed countries at 70% [2]. NSCHL typically affects young adults (ages 10 to 30 years), is more common in females, and often involves the mediastinum [3]. Risk factors for the development of NSCHL in developed countries include single-family housing and small family size. These factors increase the risk of developing the disease from early childhood through middle adulthood; however the reason why still unknown [4].

The typical presentation of Hodgkin lymphoma is painless peripheral lymphadenopathy most commonly involving the cervical region; however it is easy to be confused with infection, as the presentation can be non-specific. Patients may also present with B symptoms including fever, weight loss, and night sweats. Other presentations include back or abdominal pain from lymphadenopathy pruritus, and alcohol-induced pain. Diagnosis is established with a lymph node biopsy.

Management of NSCHL is based on staging and genomic studies. Standard treatment involves chemotherapeutic agents followed by radiation therapy if indicated. With first-line chemotherapy, Hodgkin lymphoma (including NSCHL) has generally high cure rates at around 80%. The relapse rates for stage I to II disease is 15%-20% and for advanced stage II to IV is 35% to 40% [3]. For patients with relapse, treatment options often include high-dose chemotherapy with subsequent autologous stem cell transplantation. Newer genomic strategies are emerging to improve risk stratification and target treatment regimens to improve cure rates [3].

For the emergency physician, diagnosing hematologic malignancies can be illusive. As this case demonstrates, there exists an overlap of clinical and diagnostic findings in lymphoma and infectious disease processes. Therefore, it is imperative to be persistent and maintain a wide differential diagnosis in children during the evaluation and treatment stages in order to make an accurate diagnosis.