Copyright: © 2016 Rizo-Topete L, et al. This is an open-access article distributed under the terms of the Creative Commons Attribution License, which permits unrestricted use, distribution, and reproduction in any medium, provided the original author and source are credited.

Renal dysfunction after liver transplantation is common, with an incidence of 20 to 40%, with adverse effects on life quality and patient survival [1]. Nephrotoxicity is a common cause; however, the presentation of sudden anuria and persistent liver dysfunction forces us to suspect different pathologies.

We present a case of a 61 years old women, diagnosed with liver cirrhosis NASH Child-Pugh C 10 and MELD 14 in May 2014 and type 2 diabetes mellitus of 10 years of evolution. She started with skin pigmentation in 2009, thrombocytopenia in 2011 and peripheral edema in 2014, she presented an episode of grade III hepatic encephalopathy on April 2014, and bleeding esophageal varices in July 2014, treated with band ligation. Chronic HBV and HCV viral markers were negative. In pre-transplant protocol echocardiography with LVEF 60%, negative for ischemia; preserved renal function with creatinine (Cr) of 0.6 mg / dL, BUN 9 mg/dL, Na 132 mEq/L, K 4.1 mEq /L, Albumin 3.3 mg/dL with GFR by MDRD 105 ml/min. She developed ascites with a good response to diuretics.

She underwent liver transplantation (LT) of deceased donor on March 2, 2015. Wedge biopsy of the donor liver was reported with 10% macrovesicular steatosis, with no evidence of inflammation, necrosis or fibrosis. Liver graft placement was performed successfully with piggybag technique, closing right hepatic vein, with no apparent complications, however it was not possible to close a hepato-renal shunt; for splanchnic edema, skin and subcutaneous tissue were closed. During peri-operative time, multiple blood transfusions were required: 9 blood packs, 6 plasmas, 6 platelet concentrates, 4 litres of 0.9% saline solution and 3 liters of Hartman solution. She passed to intensive care unit (ICU) with norepinephrine infussion, hemodinamicaly stable.

There was no improvement in LFTs in 24 hrs so, she was reoperated with suspected outflow obstruction. Was found a congestive liver, with color changes that improved with changes of position in color and turgidity, dig-dig graft politetrafluoroetilino (GORE-TEX®) 5 mm was placed, a biopsy was taken on suspicion of necrosis, splenorenal shunt was closed. She presented multiorganic failure (MOF) 48 hrs Pos LT, transoperative graft biopsy reported submassive necrosis 85%. Architecturally preserved; however, hepatic trabeculae were composed of eosinophilic cells with appearance of ghost, typical of necrosis, such changes predominated in Zones 2 and 3. So state 1A emergency near reported. After 48 hrs of CRRT there was improvement renal function up to 1.6 mg/dl creatinine creatinine (peak 2 mg/dL), BUN 26 mg/dL, K 3.5 mEq/L, TB 2 mg/dL and remained anuric. She presented an increase of 11kg after the 1st transplant, which achieves balance it was neutralized supported by CRRT (Table 1). Hepatic encephalopathy was documented with an ammonium elevation of 136.9 (86.9) mg/dL.

Successful liver retransplantation was performed on March 5, 2015. Cavoplasty it was made, the anastomosis of hepatic thrombus showed the presence of approximately 10% of the vessel diameter. CRRT was suspended because she presented spontaneous diuresis in the immediate post-OP 300 cc/hr diuresis and creatinine was corrected 48 hours later.

At 48 hrs post-retrasplantation she presented systemic candidemia, management began with anadalofungine was began and she stabilized. 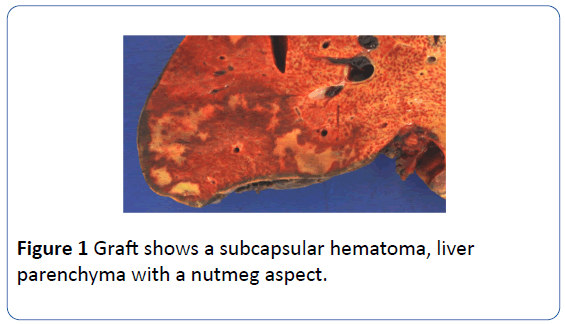 A section of parenchyma had a nutmeg aspect. Extensive necrosis (85%) keeping only few islands of residual hepatocytes around the portal triad.

Sinusoidal congestion pericentral consistent with venous outflow obstruction (Figure 2). Portal triads without histological alterations. During her stay, she had multiple electrolyte disorders: hypernatremia, hyponatremia, hypokalemia, hypomagnesemia, hypocalcemia they were associated with the use of anadalofungina and tacrolimus. Primary graft non-function (PGNF) following LT is a lifethreatening clinical condition [1-3], which is manifested by severe liver cytolysis, increasing transaminasemia, hypoalbuminemia, hepatic coagulopathy, hyperlactatemia, hyperbilirubinemia, hemodynamic instability, hypoglycemia and acute renal failure [1]. Coagulative necrosis of the liver graft is evident in the biopsy [1-3]. PGNF affects 2-23% of patients undergoing LT [1-3]; and has been defined more specifically as the cause of liver failure, that led to retransplantation or death within the first week posttransplant, in which technical, vascular, and immunological causes have been ruled out [2]. Multiple factors are involved in graft function. Among these risk factors are extended cold ischemia time, female donor gender, increased donor age, donor intensive ICU, donations after cardiac death, protracted operating room time, liver graft steatosis, decreased graft size, and renal failure [2]. At the present PGNF is the most common indication for early retransplantation, since this surgical procedure still represents the only treatment option. The patient reported here fulfilled criteria for PGNF with hemodynamic instability, need for inothropics, hepatic encephalopathy persistently elevated liver enzymes, MOF, and massive graft necrosis. She had an advanced Child-Pugh classification preLT, as well as hyponatremia, hypoalbumineia and thrombocytpopenia as to risk factors for postop PGNF [4].

Acute kidney injury (AKI) is common in patients with decompensated cirrhosis. AKI is defined as significant reduction in glomerular filtration rate, a rise in serum creatinine level of at least 2 fold from baseline or an absolute increase a serum creatinine level more than .3 mg/dL or a diuresis less than 0.5 ml/kg/h in 6 hours [5]. Pre LT renal failure has been associated with postoperative AKI [6], our patient had a type 2 HRS pre LT and a type 1 HRS posLT. As regard to donor risk factors for AKI only one was identified as deceased donor [3]. AKI was associated with grade IV graft dysfunction [4]. Oliguria in the immediate postop period was the early indication for CRRT [4,6,7]. AKI posLT is due to ATN in 70% of cases [4].

In a multivariate analysis for risk factors for CRRT hepatic encephalopathy, deceased donor, advances MELD score, intraoperative blood loss, hepatocellular carcinoma (as the indication for LT). This has led to de development of mathematical models for an early identification of cases [8].

It has been suggested that 5% of secondary LRA LT require CRRT. It has been shown that weight gain of over 10% in ICU morbidity and mortality increases, why should be evaluated at an early stage the use of CRRT in anuric patients and intensive resuscitation.

It has been suggested that 5% of secondary LRA LT require CRRT. It has been shown that weight gain of over 10% in ICU morbidity and mortality increases, so it should be evaluated at an early stage the use of CRRT in anuric patients.