An Ultra Elderly Presentation of Psoriasis: An Emerging Population

Copyright: © 2016 Khosravi H, et al. This is an open-access article distributed under the terms of the Creative Commons Attribution License, which permits unrestricted use, distribution, and reproduction in any medium, provided the original author and source are credited.

We report the case of psoriasis in an 89-year-old patient. Although psoriasis is a common dermatological condition with an incidence rate of 2% in the USA, the incidence within the geriatric population, and particularly the ultraelderly (those over 85 years), is undocumented. It’s thought that this lack of familiarity can be a source of treatment delay. In this case report, we hope to bring attention to the geriatric presentation of this disease while also raising awareness about the field of geriatric dermatology.

An 89-year-old female with a history of degenerative joint disease and hypertension presented with a new onset rash covering 30% of her body surface area. She reported the skin lesions started on her elbows one month prior. She noticed they were first dry and scaly and then progressed to red plaques with white scales. They were associated with pruritus. The rash subsequently appeared on her knees and in her scalp. It was at this point when she saw a physician who explained that she did not fit the age bracket for psoriasis, and she was given low potency topical steroids without a diagnosis. After a few weeks of use, the rash continued to spread with increased pruritus [1].

Physical exam revealed an elderly woman constantly itching but in no apparent distress. Inspection of her skin showed welldemarcated, beefy red to erythematous papules and plaques with overlying micaceous scales (Figures 1 and 2). Physical removal of individual scales showed pinpoint bleeding. The distribution included 30%-40% of her body surface area including her lower extremities, upper extremities, abdomen, back and complete coverage of her scalp. All other systems of her physical exam were within normal limits. 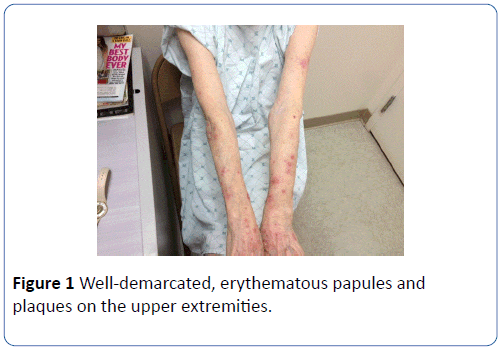 Figure 1: Well-demarcated, erythematous papules and plaques on the upper extremities. 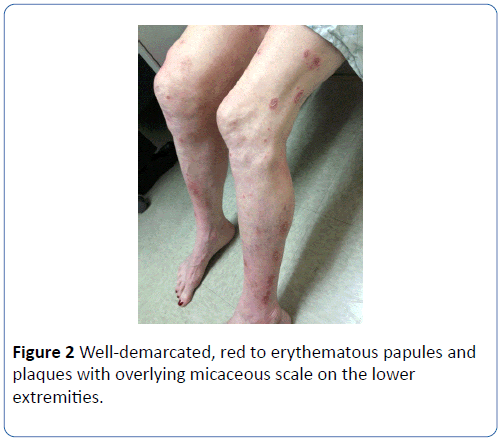 Figure 2: Well-demarcated, red to erythematous papules and plaques with overlying micaceous scale on the lower extremities.

All laboratory values were within normal limits. A skin biopsy was taken and results showed findings consistent with plaque type psoriasis vulgaris. The patient was started on clobetasol topically and acitretin orally. The patient has been well controlled with monthly follow-up visits for over six months. Her psoriasis now covers only 5% body surface area and she remains in good health.

There is limited literature regarding late-onset psoriasis (after 65 years of age) and no literature to our knowledge regarding the ultra-elderly. While psoriasis is widely known by general practitioners and dermatologists, its presentation in elderly individuals is uncommon and can be a source of treatment delay. Untreated skin disease in the elderly can lead to greater quality of life impairment than the general population as they have less functional reserve. In addition, as elderly patients typically take multiple medications, there is a risk of these medications aggravating their psoriasis. Lastly, there is little available data on the management of psoriasis in the elderly with literature only addressing a few therapies including topical calcipotriol/betamethasone, broadband UVB, methotrexate, alefacept, and etanercept [2].

As demonstrated in the case above, geriatric dermatology, or dermatogeriatrics, is a new, unexplored field that blends aspects of gerontology, including prioritization of life-quality and functional status in elderly patients, with the treatment of skin diseases. Literature is limited regarding the incidence, prevalence, and symptomatology of all skin diseases in elderly population. We hope that with each case, we can help elucidate the nuances of this population and improve care for geriatric patients suffering from skin disease.