Dengue fever is identified as one of the most important mosquito-borne viral disease worldwide. Every year a large number of people belonging to urban populations suffer from this viral infection. Various presentations of dengue fever have been documented, however, neurological complications in dengue fever are relatively uncommon. Among these, Acute Disseminated Encephalomyelitis (ADEM) has been observed very rarely. Here we present a case of 15 year old boy suffering from ADEM following dengue fever.

Dengue infection is caused by a flavivirus, and nervous system involvement is seen with the serotypes 2 and 3. Neurologic manifestations occur in 4% to 5% of patients [1] and it includes encephalopathy, encephalitis, Guillain-Barre Syndrome (GBS), myelitis, meningitis, acute disseminated encephalomyelitis (ADEM), facial and ulnar mononeuropathy and stroke, both ischemic and hemorrhagic [2]. ADEM following dengue infection is very infrequent, and only few cases have been documented.

ADEM produces multiple inflammatory lesions in the brain and spinal cord, particularly in the white matter. Usually these are found in the subcortical and central white matter and cortical gray-white junction of both cerebral hemispheres, cerebellum, brainstem, and spinal cord. However periventricular white matter and grey matter of the cortex, thalami and basal ganglia may also be involved [3].

A 15 year old boy with history of fever for 7 days followed by drowsiness of 2 days duration was referred to our emergency department. Fever was high grade without chills or rigors but was associated with headache, low backache, myalgia, arthralgia, generalized flushing and retro orbital pain. Later he became drowsy and developed insidious onset and gradually progressive weakness of both upper and lower limb which was completed within 4 days. Subsequently he also developed sudden onset slurring of speech. His drowsiness gradually increased and later he also developed urinary incontinence. However, there was no history of recent vaccination, diabetes, skin rash and similar attack in past or any past exposure of tuberculosis.

On general examination patient was febrile, pulse was 100 per min, BP was 90/60 mmHg and temperature was recorded as 1020 F. Child was mildly plethoric and tourniquet test was positive. On neurological examination patient was drowsy, there were no signs of meningeal irritation, and pupils were bilaterally mid dilated, symmetrical and sluggishly reacting to light. There was no evidence of any papilledema/retinal haemorrhage on funduscopic examination. We also noted upbeat nystagmus in both eyes, generalized hypertonia with brisk jerks in all 4 limbs and bilateral extensor plantar response. Detailed neurological examination including cerebellum, sensory, and other cranial nerve examination could not be done properly as patient could not follow commands properly. Other systemic examination did not reveal any abnormality.

Total leukocyte count was 2900/cumm, total platelet count was 80,000/cumm, Hb% was 11.5 g/dl, Erythrocyte sedimentation rate was 10mm in 1st hour and packed cells volume was 48.4. Platelet count decreased up to 50,000/cumm within 2 days. Peripheral blood film showed leukopenia with thrombocytopenia. Dual antigen for malaria was negative; serum creatinine was 1.2mg/dl and liver function test was within normal limit. Urine routine examination was also normal. However, IgM for dengue was positive in serum. Cerebrospinal fluid (CSF) study revealed a glucose of 70 mg/dl, protein was 92 mg/dl, cell count 6/cumm with all lymphocytes. Herpes simplex antibody (IgM) was negative and so was Oligoclonal bands in CSF.

Magnetic Resonance Imaging (MRI) of brain with contrast was done on the day of admission which revealed T2 hyperintense signal changes in pons, adjacent medulla and cervical cord (Figure 1). suggestive of ADEM. On basis of clinical picture and the MRI scan findings we kept the provisional diagnosis of ADEM. Subsequently he was started on high dose intravenous steroids (1 gm/day for 5 days) along with bedside physiotherapy and supportive measures. He made a dramatic improvement over the next few weeks. CSF was repeated after 2 weeks which revealed glucose 50 mg/dl, protein 58 mg/dl, cell count 3/cmm(all lymphocytes). He was able to walk independently at the end of four weeks. 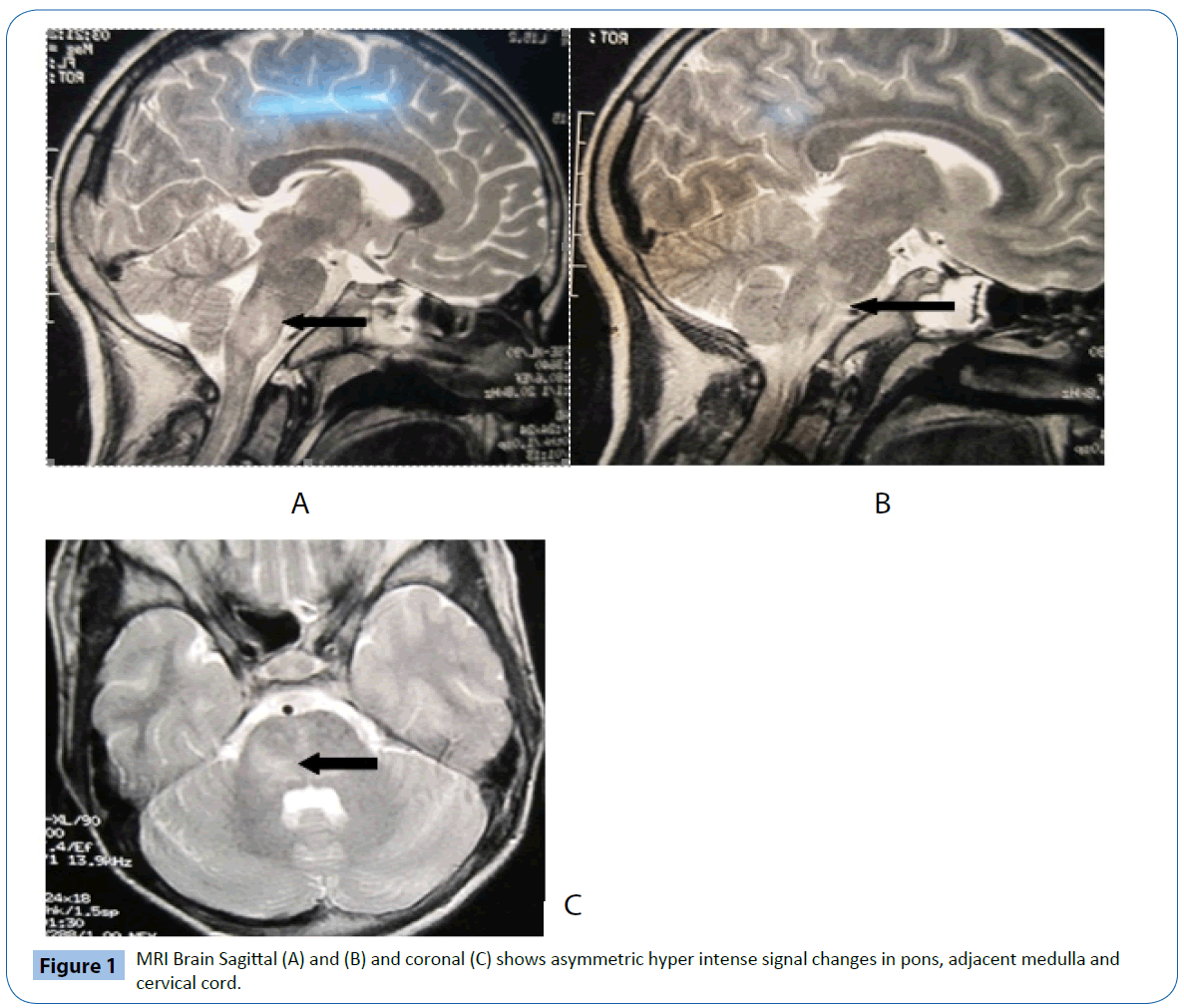 ADEM is an immune mediated disease of the brain. It usually occurs following a viral infection but may appear following vaccination, bacterial or parasitic infection, or occasionally even appear spontaneously. The incidence rate is about 8 per 1,000,000 people per year [4]. Although it occurs in all ages, most reported cases are in children and adolescents, with the average age around 5 to 8 years old. The mortality rate may be as high as 5% [4] Viral infections thought to induce ADEM include influenza virus, enterovirus, measles, mumps, rubella, varicella zoster, Epstein Barr virus, cytomegalovirus, herpes simplex virus, hepatitis A, coxsackievirus and rarely dengue; while the bacterial infections include Mycoplasma pneumoniae, Borrelia burgdorferi, Leptospira, and beta-hemolytic Streptococci [5]. The most common vaccine proven to induce ADEM is the rabies vaccine [5] ADEM has an abrupt onset and a monophasic course. Symptoms usually begin 1–3 weeks after infection or vaccination. Major symptoms include fever, headache, drowsiness, seizures and coma. Additional symptoms include hemiparesis, paraparesis, and cranial nerve palsies. ADEM following dengue infection is extremely rare. Recent observations indicate that the clinical profile of dengue is changing, and that neurological manifestations are being reported more frequently. The pathogenesis of neurological manifestations are multiple and includes: neurotrophic effect of the dengue virus, related to the systemic effects of dengue infection, and immune mediated [5]. Isolation of dengue virus in CSF by PCR has only been possible in direct brain invasion by dengue virus (neurotropism) i.e. in cases of frank dengue encephalitis [6]. Isolation of dengue virus in cases of ADEM is not possible as ADEM is an immune mediated reaction. The exact incidence of various neurological complications is uncertain. In addition to that there are no generally accepted diagnostic criteria for ADEM. The predominant white matter involvement suggested demyelination in this case. As there was pure white matter involvement in this case whether it was a first episode of Multiple Sclerosis (MS) needs to be considered here, as it has important therapeutic and prognostic implications. However, distinguishing ADEM from MS on a single MRI brain scan is impossible, and the monophasic course in ADEM has to be demonstrated with follow up of the patient. Serial MRI scans may prove helpful. Emergence of new lesions and a multiphasic course is highly suggestive of MS, though recurrent ADEM has been reported.

In country like India, it would be wise to investigate for dengue infection in patients with fever and acute neurological manifestations. This will help in early diagnosis, treatment and proper understanding of the disease.

We report here a case of ADEM that was associated with dengue infection associated with significant structural damage as detected on MRI. This was classified as a classic case of dengue without evidence of the hepatic dysfunction, circulatory collapse, hypoxia or metabolic imbalance secondary to encephalopathy. These features emphasize that a cytopathic effect was evident due to the presence of the virus in the CNS. Future studies will be needed to clarify whether the neurological manifestations are due to neural tropism or the virulence of a variant virus of the dengue virus.