Copyright: © 2016 Alruwaili N, et al. This is an open-access article distributed under the terms of the Creative Commons Attribution License, which permits unrestricted use, distribution, and reproduction in any medium, provided the original author and source are credited.

Background: Medical Toxicology (MT) is a core content area of the Emergency Medicine (EM) curriculum and a recognized subspecialty by the American Board of Medical Specialties and the American Osteopathic Board of Emergency Medicine. Since there is not a uniform presence of MT faculty in all EM residency programs, we attempted to describe the current methods and delivery of MT education at U.S. EM residency programs. Methods: A survey was sent to the program director of Allopathic and Osteopathic EM programs. Results of the survey were entered in a secure electronic database. This study was deemed exempt by the IRB at our institution. Results: The survey was completed by 57% (113/197) of the programs that we identified. Eighty four programs were allopathic while 25 and 4 were osteopathic and combined respectively. The length of the emergency medicine training was 3 years in the majority of respondents (62%) while it was 4 and 2 years in 37% and 1% of respondents respectively. A MT rotation was mandatory in 67%, offered as an elective in 12% and not offered in 21% of responding programs. When offered, the duration of the MT rotation was 1 month or 4 weeks in 85% and 3 weeks or less in 15% of programs. The rotation was offered onsite in 40% of programs and offsite at 60% of programs which had a MT rotation. When offered as an elective, 71% of respondents reported that less than 50% of their residents took advantage of that offer. 88% of programs which did not offer a MT rotation, allowed their residents to pursue it as an away rotation. When examining the structure of the MT rotation, 92% of programs had a poison center component while 71% had a bedside consult service and 57% had home call duties. Medical toxicology lectures were given by programaffiliated toxicologists in 63%, visiting medical toxicologists in 36%, EM physicians in 59%, online lectures in 11.5% and other methods in 5% of respondents. Ninety four percent of respondents were amenable to using online education. Thirty seven percent of respondents had no affiliated toxicologists while 39, 20 and 4% had 1-2, 3-5 and greater than 5 respectively. Conclusion: MT training is heterogeneous in US EM programs. Elective and offsite rotations provide the training when not available at the primary institution. Alternative methods such as online education need to be further evaluated.

The study consisted of a cross-sectional survey that was sent electronically to the program directors of US allopathic and osteopathic emergency medicine residency programs that were identified using the Society of Academic Emergency Medicine web portal as well as the American Osteopathic Association web portal [4,5]. Responding residency programs were entered in a raffle to win one of 3 toxicology textbooks that was mailed to them after the completion of the survey data collection. The toxicology rotation was defined as a clinical rotation that involves patient care (bedside, phone consult, or poison center-based) and was categorized as mandatory, offered as an elective, or not offered at all. Mandatory and elective rotations could be offered onsite or at another institution. The study was deemed IRB exempt from review at our institution.

The data was analyzed using the Statistical Package for Social Science (SPSS) version 17.0. The relation between the availability of a mandatory rotation and the type of residency program (allopathic or osteopathic), length of training, and the availability of medical toxicology faculty on staff was analyzed using chi square. This was followed by a binary logistic regression. 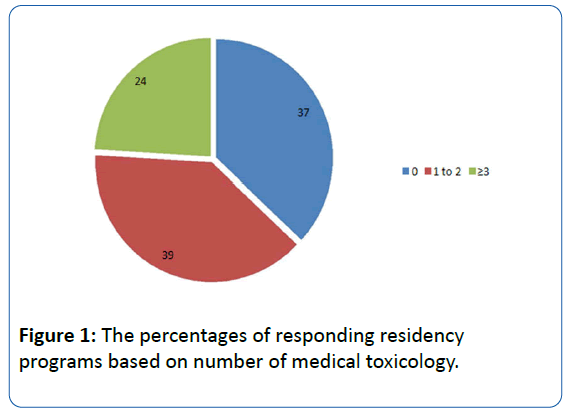 Figure 1: The percentages of responding residency programs based on number of medical toxicology.

The toxicology rotation was mandatory in 75 (67%) and offered as an elective in 14 (12%) of responding programs. Twenty-four (21%) of responding programs did not offer a toxicology rotation (Figure 2). Among the eighty-nine programs that offer a rotation, 36 (40%) do so onsite while 53 (60%) relied on other institutions to provide the clinical experience. 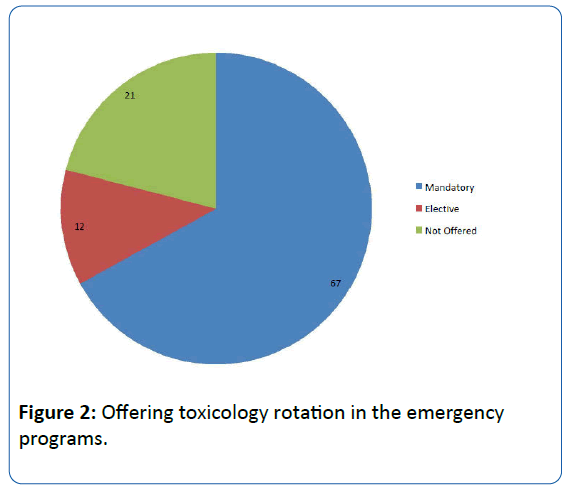 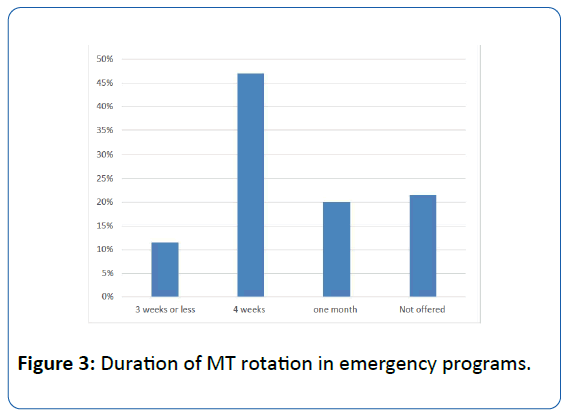 Core content medical toxicology lectures were given by affiliated toxicologists in 71 (63%), visiting toxicologists in 41 (36%), and emergency medicine faculty in 67 (59%) of responding programs (the overlap reflects the option to list multiple lecturers). Online lectures were used by 13 (12%) programs and 6 (5%) programs utilized other methods. A vast majority of respondents (94%) were amenable to online educational methods.

The study is limited by the moderate response rate and the inherent problems with survey-based research such as the potential for inaccurate comprehension of the survey questions that can lead to incorrect answers. Programs with toxicology rotations might be more likely to participate suggesting these reported results are ‘best-case’ scenario.

In 2000, Hantsche et al. surveyed US emergency medicine residency programs and found, based on a 51% response rate, that a MT rotation was required at 76% of the responding programs, was an elective in 19% and not available at 5% of the programs [1]. Our results, based on a slightly higher response rate, showed a higher percentage of programs that do not offer a medical toxicology clinical rotation during the training (21%). The cause of this apparent increase in the number of programs that do not offer a rotation is unknown and does not seem to be due to a change in the number of available toxicologists on faculty in these programs. Hantsche et al. reported that only 63% of residency programs that responded to his survey had a toxicologist on faculty [1]. This percent appears to be identical to our result (Figure 1). Interestingly, the increase in the number of available toxicology faculty at a program did not appear to increase the number of programs with a mandatory rotation. However, our finding that programs that offered a mandatory rotation were more likely to have 1-2 toxicology faculty can be explained by the fact that the majority of responding programs have 1-2 toxicology faculty (39%) compared with programs that have greater or equal to 3 (29%). On the other hand, the increase in the length of the residency program did appear to increase the number of programs that offer a mandatory rotation. This is likely to be due to the additional year of training that allows for more rotations and electives. Other factors that can explain the decrease in mandatory and elective toxicology rotations reported in our study include the introduction of other rotations such as emergency ultrasound and administration that compete with regards to time allotments.

Furthermore, the structure of toxicology rotations varies greatly: a majority of programs have offsite rotations and a large majority of programs have a poison center component. In contrast, a bedside clinical consult or home-call components were present in a relatively lower percentage of programs. Dependence on a poison center may not be an optimal design because there are only 57 poison centers in the United States and their resources are currently challenged by funding cuts. Additionally, off site rotations are difficult due to funding issues and Accreditation Council of Graduate Medical Education (ACGME) duty hours and rotation requirements. A uniformly structured medical toxicology rotation could be advantageous and could be created through collaboration between emergency medicine and medical toxicology specialty organizations.

In a similar manner, medical toxicology lectures are delivered primary by a variety of specialists including affiliated or visiting medical toxicologists and emergency medicine faculty. A relatively small percentage of programs utilize online lectures even though a majority of programs stated they were agreeable to utilizing online tools. In view of the lack of sufficient number of medical toxicologists at emergency medicine training programs, training curricula should include a high quality and comprehensive online education component composed of audiovisual modules, reading materials, interactive case-studies as well as pre-tests and post-tests to evaluate the students.

Our study revealed heterogeneity in the structure of MT training in US emergency medicine training programs. The proportion of programs not offering a MT rotation appears to have increased over the past decades. A majority of programs which offer a MT rotation do so at a poison center. While longer programs are more likely to have a MT rotation, the presence of extra MT faculty does not change that figure. The wide variation in MT educational formats combined with the current uncertainties in poison centers’ funding makes the idea of a national MT, computer-based learning instrument interesting.